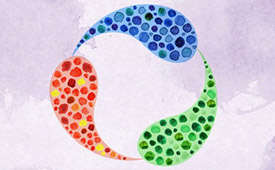 Ayurveda is an alternative system of medicine with historical roots in India. Ayurvedic medicine is one of the world's oldest holistic healing systems and was developed more than 3,000 years ago.

Ayurvedic teachings are based on the belief that health and well-being depend on a delicate balance between mind, body and soul. The focus in Ayurveda is less on fighting diseases and more on promoting health so that diseases do not occur in the first place. Treatments can vary according to health problems.

Ayurveda and Your Own Life Force

According to Ayurveda, you are healthy when your mind, body and soul are in harmony with each other. However, if this balance remains disturbed over a long period of time, one becomes ill. Factors that can upset this balance include genetic or congenital defects, injuries, weather and seasonal changes, age, stress, negative emotions and poor diet.

According to Ayurvedic teachings, all human beings are made up of five basic elements: space (or ether), fire, water, air and earth. These elements determine the nature of rocks, as well as plants, animals and humans.

In the human body, they combine to form three life forces or energies, the so-called doshas. These doshas control how the body functions. Their names are Vata (space and air), Pitta (fire and water), and Kapha (water and earth).

Everyone has a unique blend of the three doshas. But one is usually more pronounced than the others and therefore dominant. Each dosha controls certain bodily functions. In Ayurveda, it is believed that the likelihood of getting sick and the health problems that a person develops are related to the balance of doshas. Problems arise when they are not in balance. Let's take a closer look at the individual doshas:

This dosha is often considered the strongest. It controls the basic bodily functions, for example, cell division. It also controls the mind, breathing, blood circulation, heart function and the ability to eliminate waste through the intestines. Things that can upset Vata dosha include eating too soon after your last meal, anxiety, grief and going to bed late.

When the Vata dosha is dominant, a person is more likely to suffer from diseases such as anxiety, asthma, heart disease, skin problems and rheumatoid arthritis.

This dosha controls digestion, metabolism (how well you break down food) and certain hormones related to appetite. Eating acidic or spicy food and spending too much time in the sun can disturb or imbalance this dosha.

When Pitta is dominant, a person is more likely to suffer from diseases such as Crohn's disease, heart disease, high blood pressure and infections.

This life force controls muscle growth, body strength and stability, weight and the immune system. It can be disturbed by sleeping during the day, eating too many sweet foods and eating or drinking things that contain too much salt or water.

When Kapha is dominant, a person can develop asthma and other respiratory problems, cancer, diabetes, nausea after eating and obesity.

An important part of Ayurveda is treatment aimed either at a specific problem or that generally promotes the balance of the three doshas.

An Ayurveda practitioner will create a treatment plan specifically tailored to you. It takes into account your unique physical and emotional makeup, dominant dosha and the balance between these three.

The goal of the treatment is to rid your body of undigested food, which can remain in the body and lead to disease. The cleansing process, also called panchakarma, is designed to alleviate symptoms and restore harmony and balance. To achieve this, an Ayurvedic regimen may include blood purification, massage, medicinal oils, herbs, and enemas or laxatives, as needed.

Please buy Ayurvedic products only from absolutely trustworthy manufacturers who are preferably located in Europe and whose products have been tested for harmful substances by independent bodies. Unfortunately, it has been repeatedly found that Ayurvedic products from Asia are contaminated with heavy metals such as lead, mercury or arsenic. These heavy metals can lead to life-threatening diseases, especially in children.

Also, to be on the safe side, always check with your doctor before trying Ayurveda or any other alternative medical treatment.

We avoid CO2 emissions wherever we can! Our remaining carbon footprint is compensated through eco-social projects.